Hello again... these two photos of my pup Tucker are amongst my favourites. I love that he looks like he's in jail!! Anyone who knows Tucker always comments on how cute he is, and he definitely is very cute. He has a very mischievous side to him... you don't always know what he's going to do! So sometimes he's GOOD and sometimes he's BAD - it depends on his mood! 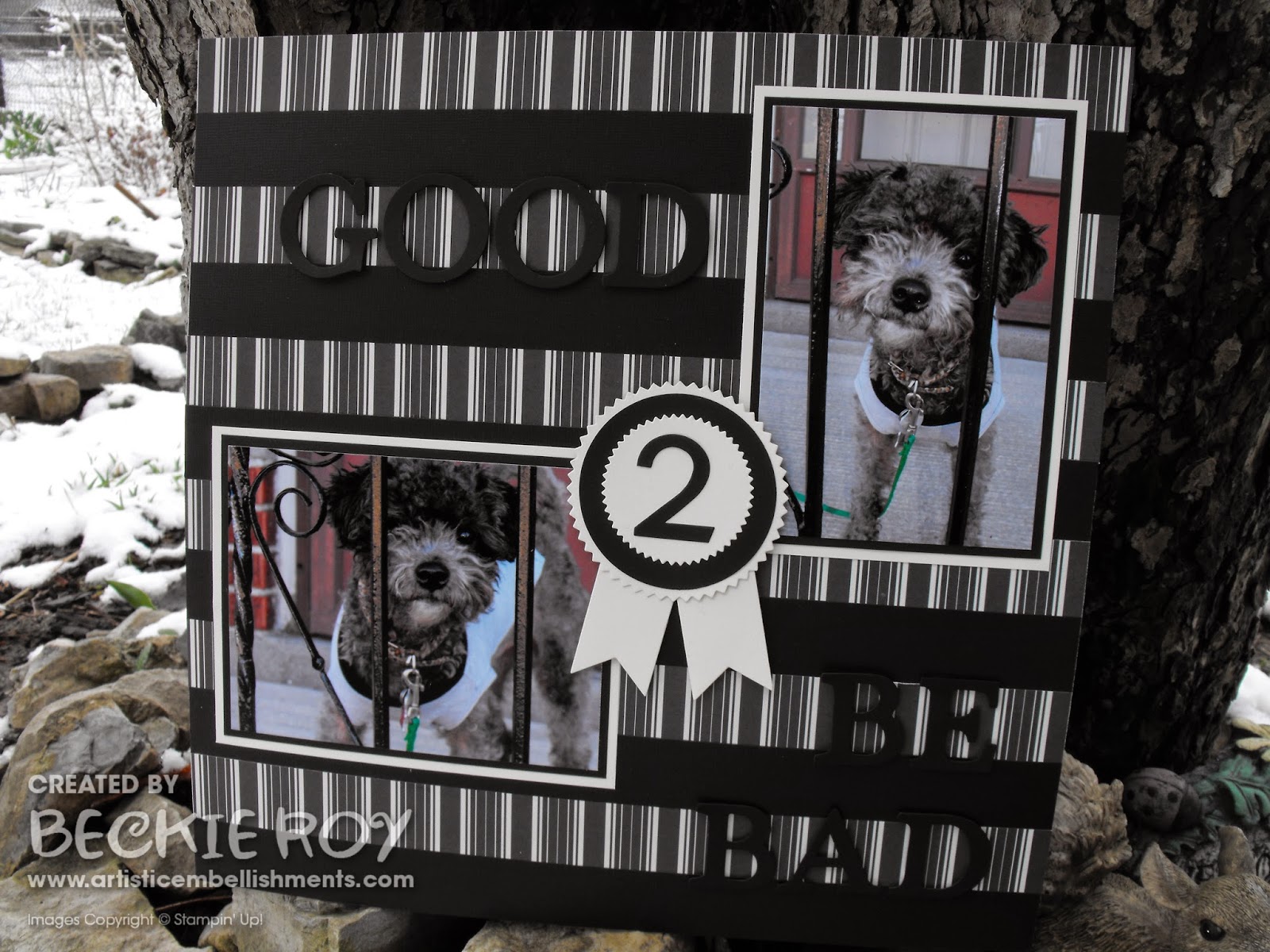 You've probably noticed that snow in the background, maybe, maybe not?! They were correct as they predicted we got snow... in APRIL! I couldn't believe it when I woke up to see my lawn covered with a layer of white stuff! I thought for sure it was a mistake, how could we possibly get snow?! Well, we did and now all my crocuses are all wilted. We even had our lawn fertilized last week - I thought that was odd that they would come so early since snow was in the forecast for early this week!
Anyhoo... onto my share for today... 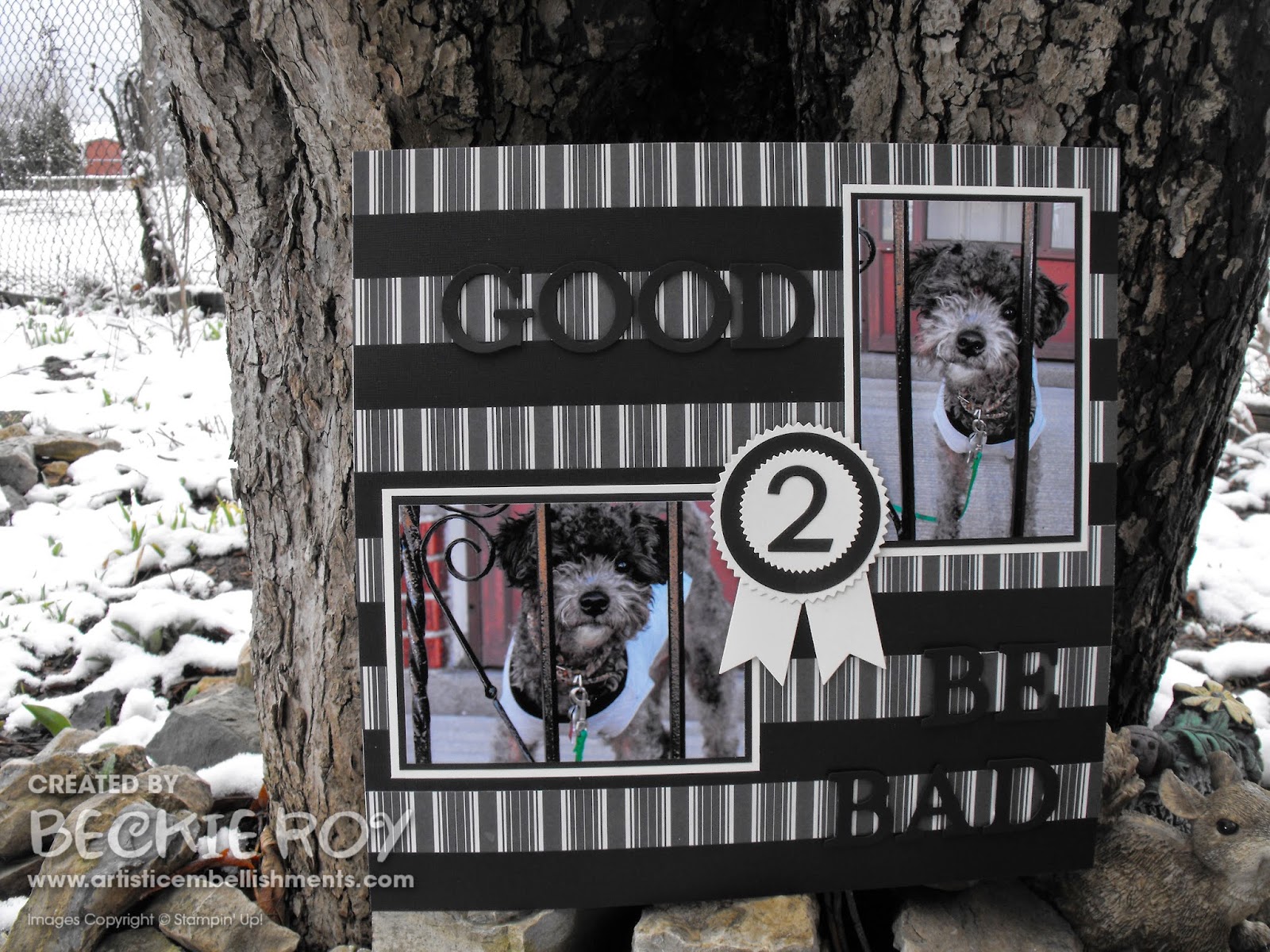 Tucker is actually standing on our porch (from last spring), I finally got around to completing some of my scrapbook pages. It actually looks like he was in jail, I was doing some spring gardening and he was tied to the railing so he wouldn't harass my neighbours. I do recall him being good that day, believe it or not!!? 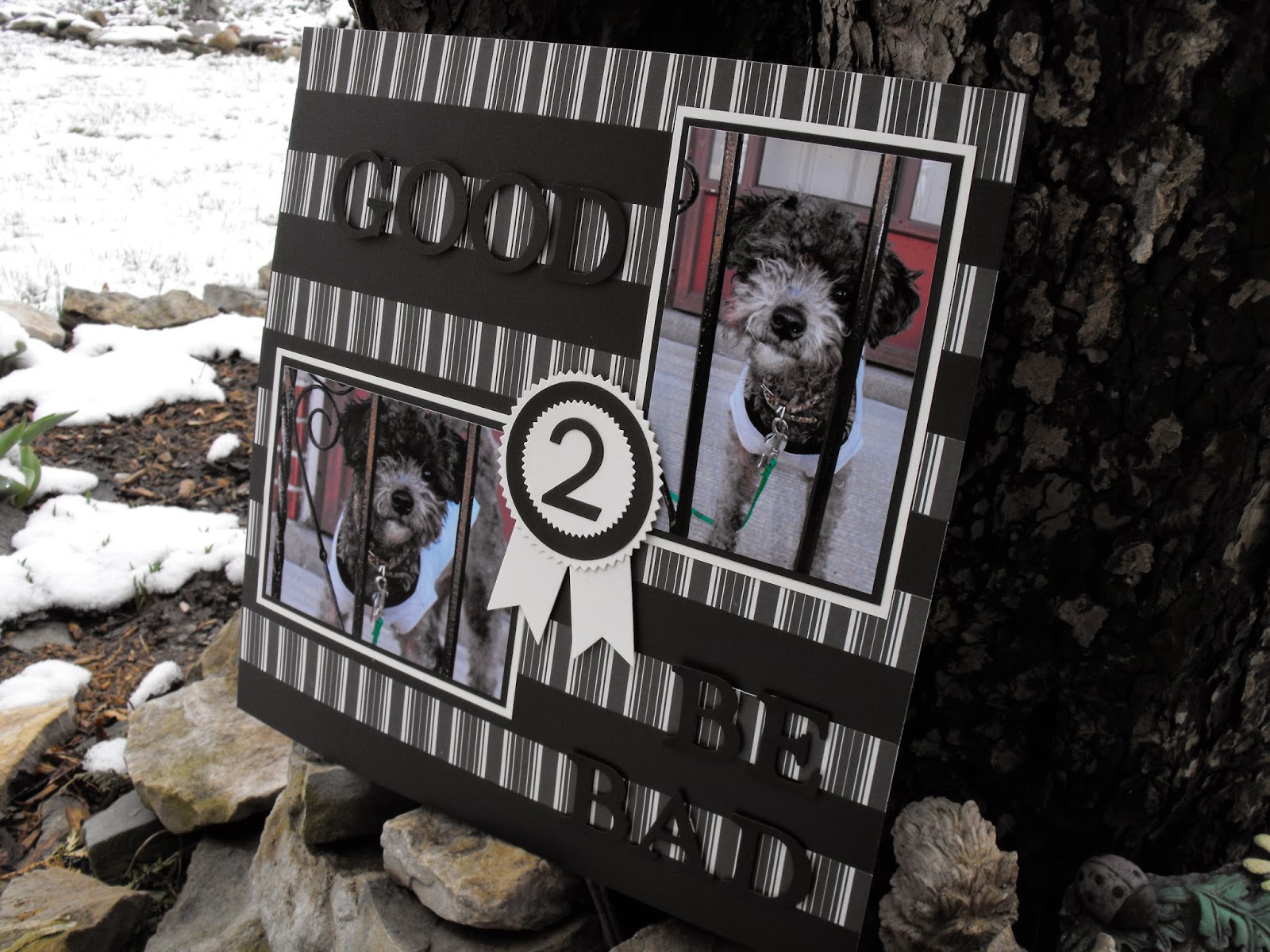 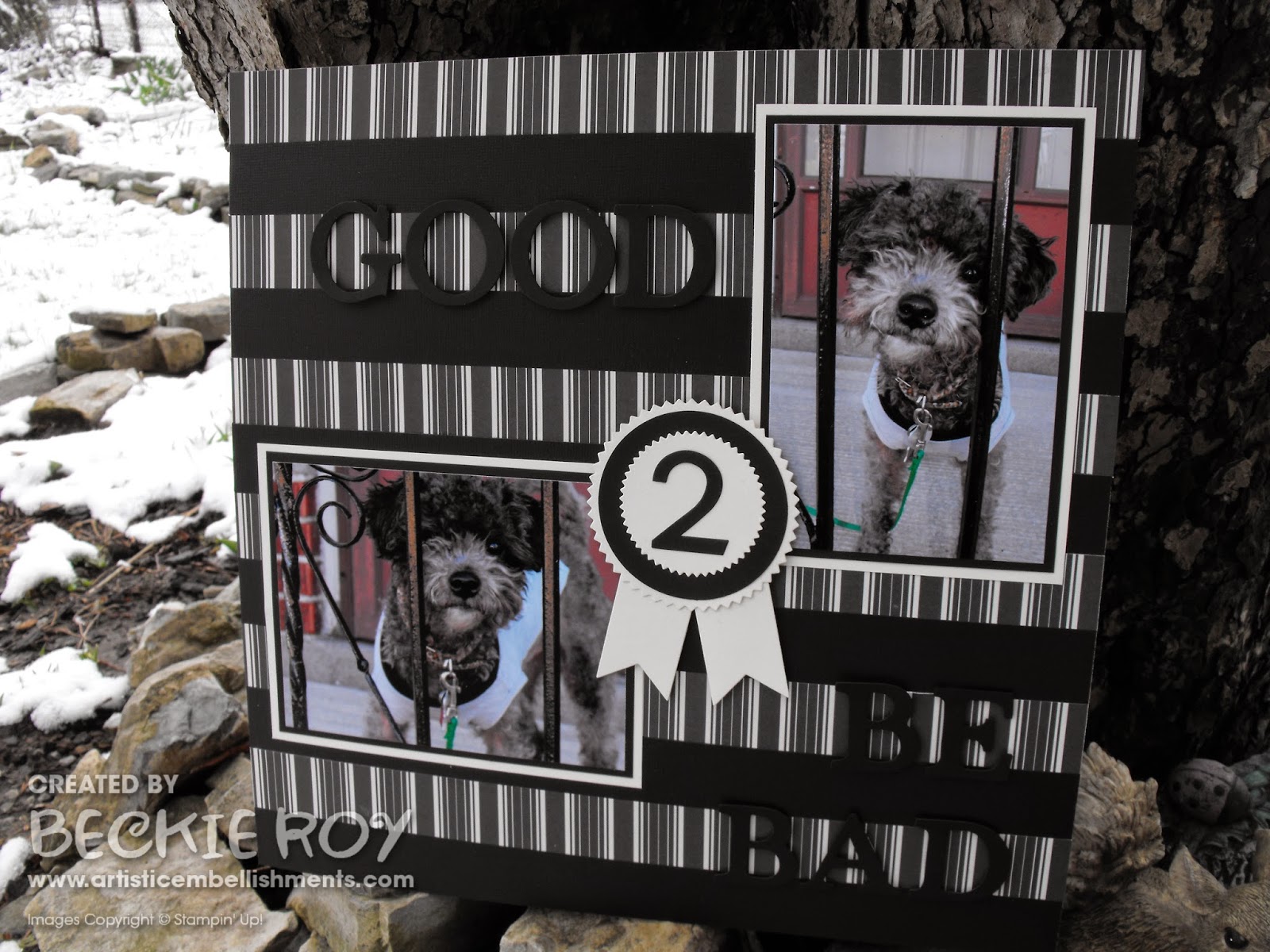 I decided I wanted to make a striped background right away. I remembered that the 'Modern Medley' designer series papers has a nice 'stripy' paper. I cut 1" strips of the DSP and of Black 12X12 cardstock. I tried turning the page so the stripes were vertical, but it just didn't look right, so I turned the horizontally. Every time I look at the striped paper it reminds me of the Big Bang Theory. There was a Halloween episode where Sheldon dressed up like the Doppler effect (his outfit looked just like the paper). I added the letters in between the black stripes so the top of the letters blended in with the black stripes, for the look I was going for.

I chose the title 'Good 2 Be Bad' because some people think he's good and some bad. My mom for instance, just loves her 'Grand-Dog' and he goes absolutely crazy when she visits and my sister can't stand him. He's my dog so I love him either way :) 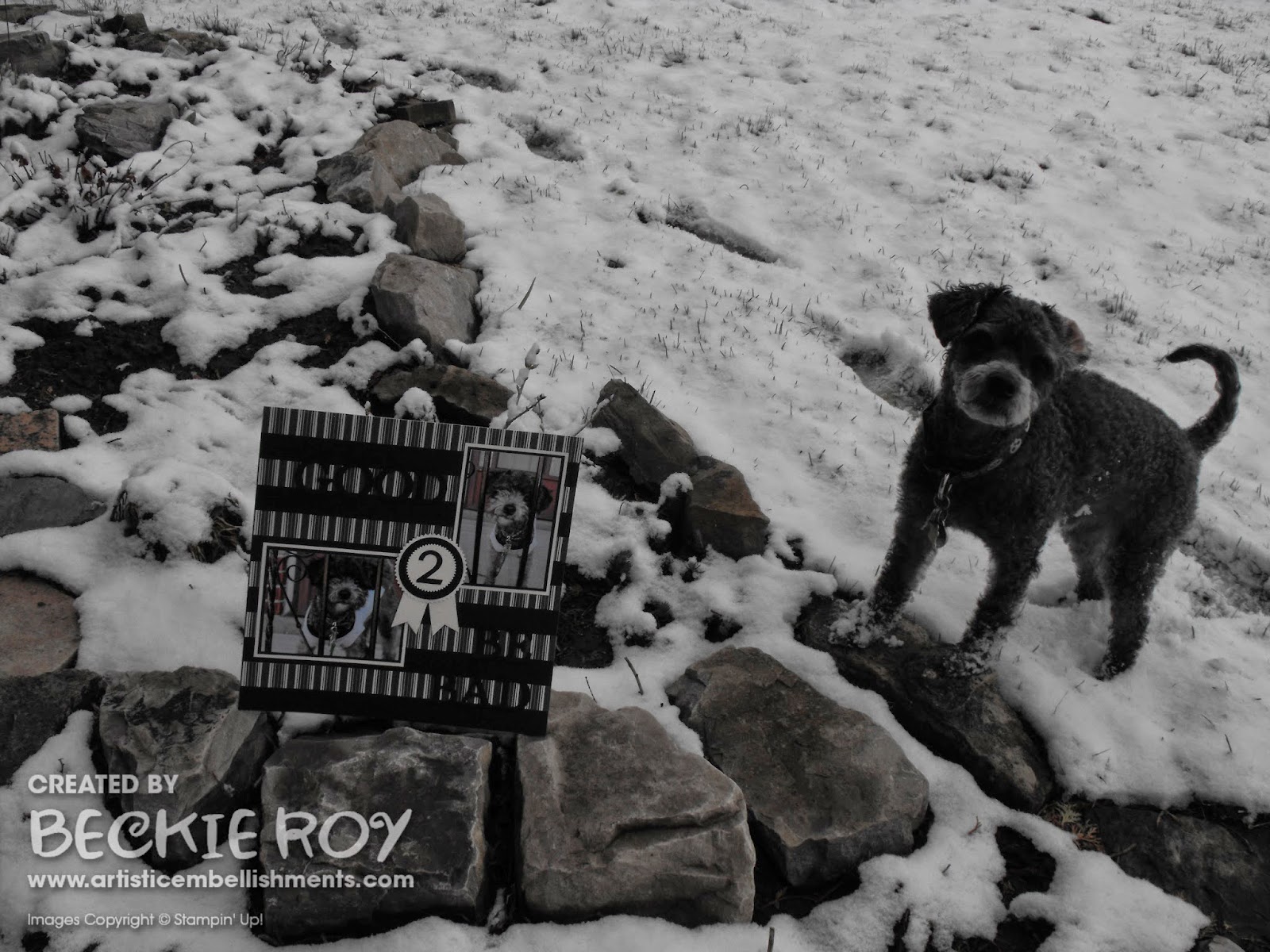 Tucker is the kind of dog who follows you wherever you go, even as I was taking my photos he just had to be nosy and get into my photos! Oh well, he looks cute :)