Last week I had a bit of crafty time - since it was too COLD to go outside, I decided to "play" with one of my neglected stamp sets. Whenever a NEW catalogue or new products come out, I seem consumed by them and only want to "play" with them. I decided I'd pull out one of my favourite sets from the Stampin' Up! Annual Catalogue. I chose to play with Giggle Greetings. This is one of those sets that I ordered immediately last June, well for two reasons. One there is a cat in the set, and two because the sentiments are just too funny to resist. I set out on my mission to use EVERY stamp in the set, and that I did. I went for a grunged out look for these four cards... but I am loving how they turned out! Check them out.... 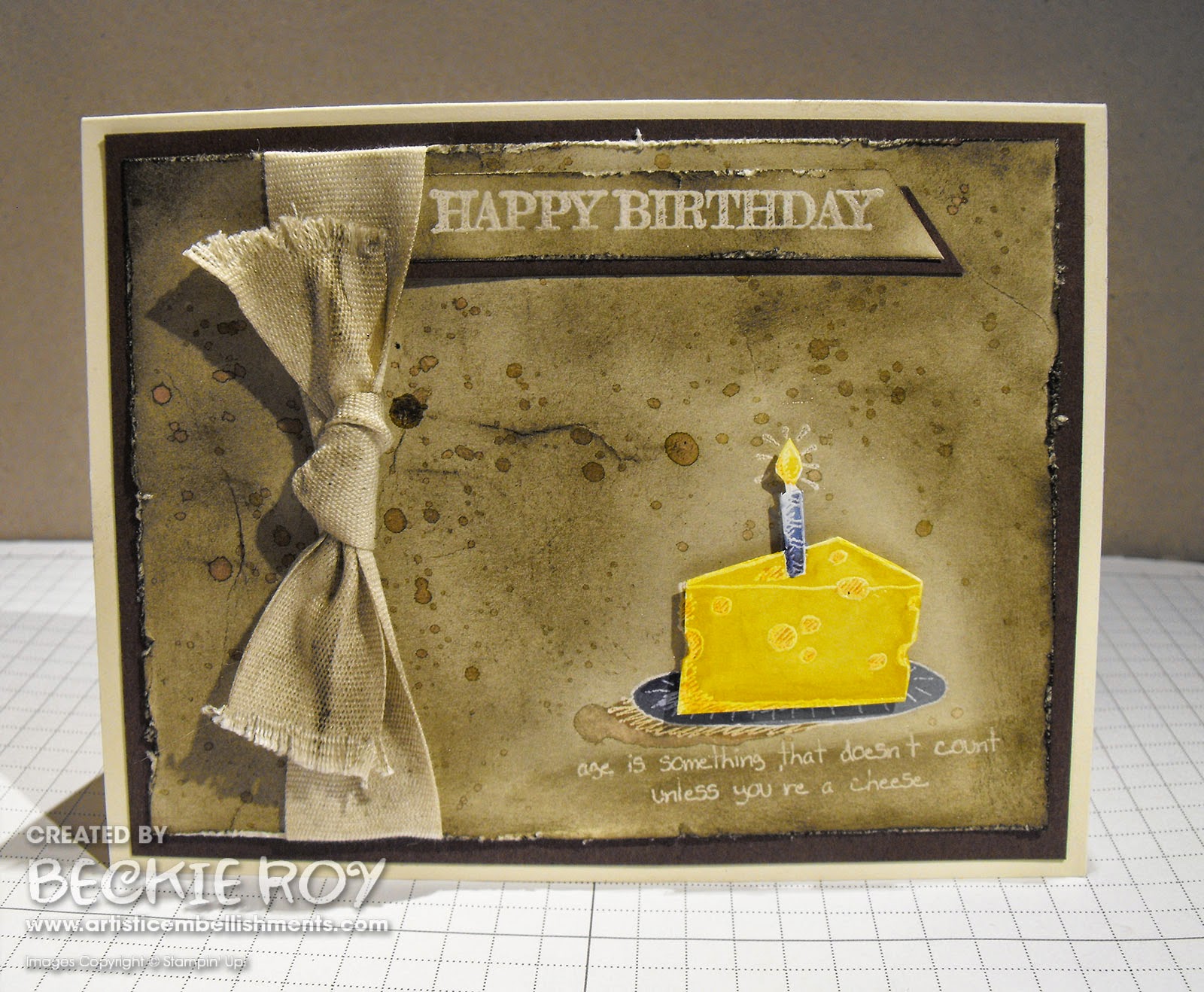 For this first card, I used the "swiss-cheese-cake", hahaha... The only cheese cake I'd ever eat, as I don't like cheesecake (I know it's weird, but hey!). I have been on this vintage/grungy look lately using sponges, embossing powders and the distressing tool to get the desired look. I kept the same colour scheme for my four cards, as I wanted them as a set.
﻿ 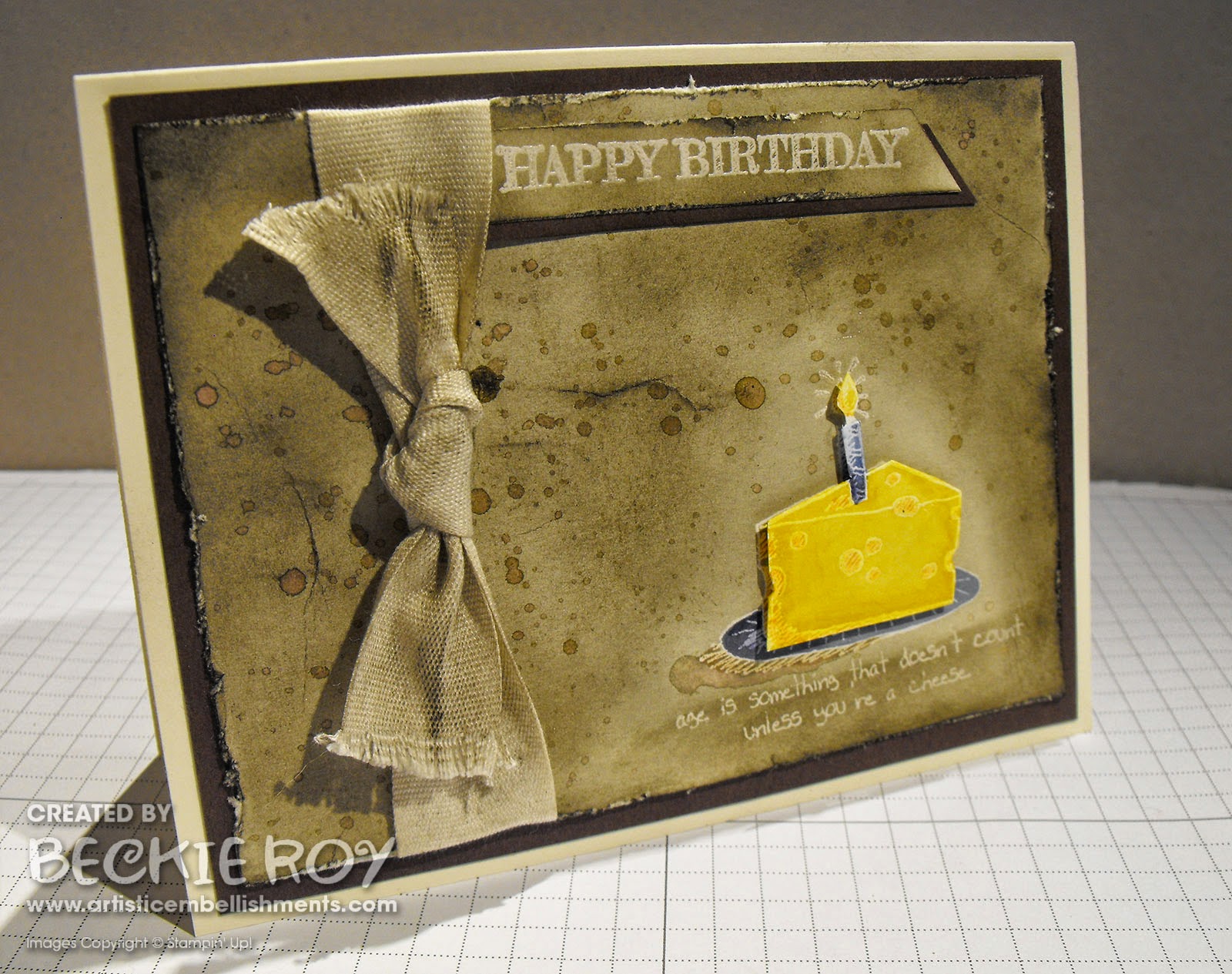 I started with a base of Very Vanilla, and layers of Chocolate Chip and Very Vanilla.  I really grunged out the vanilla top piece. To get the splatter look, after I sponged my piece - I simple splattered water onto my paper to get the spotches. You may also notice some of the creases, I actually crumpled the paper a bit - so that when I sponged it would show darker.
﻿ 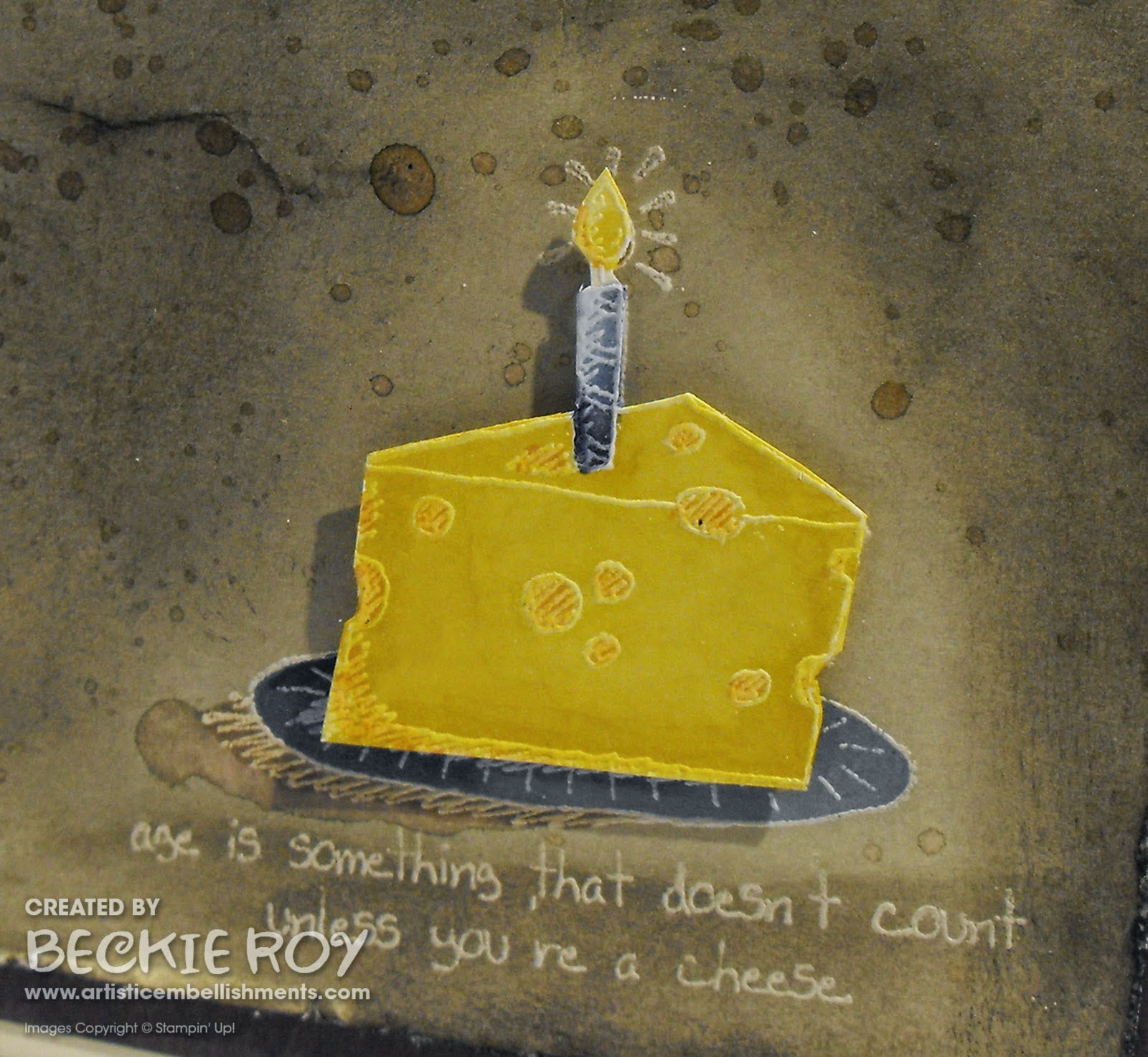 Here's a close up of the swiss-cheese-cake image. I heat embossed with Clear Stampin' Emboss Powder two times. The second one I cut out the cheese and candle only and popped them up on dimensionals. Next, is the cute kitty cat.... 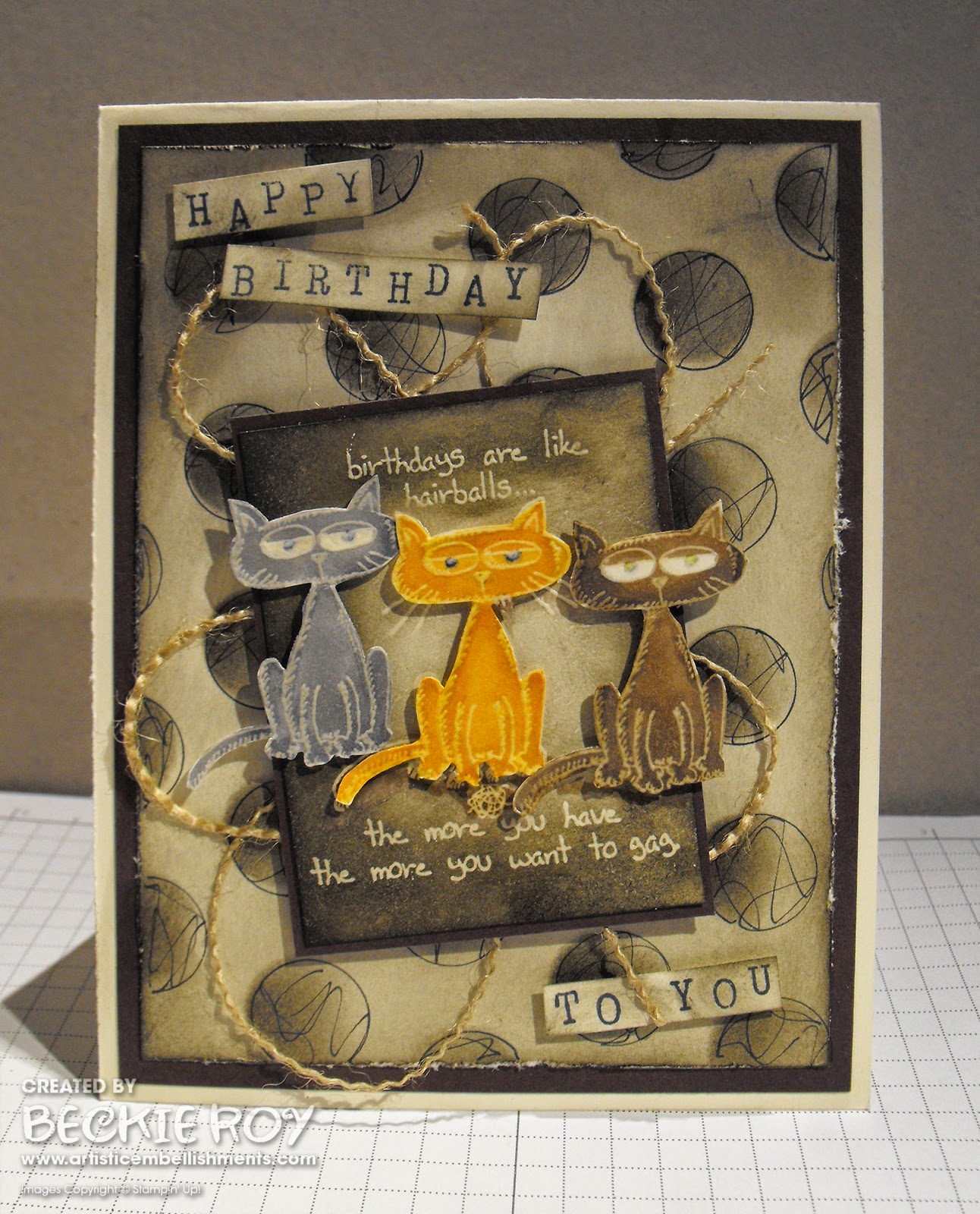 What's better than ONE cat, three. I decided to re-visit my stenciling using the Decorative Mask from the Dots & Stripes pack. I chose the dots, I sponged, then doodled some black lines - to look like string or hairballs like the stamped image.
﻿ 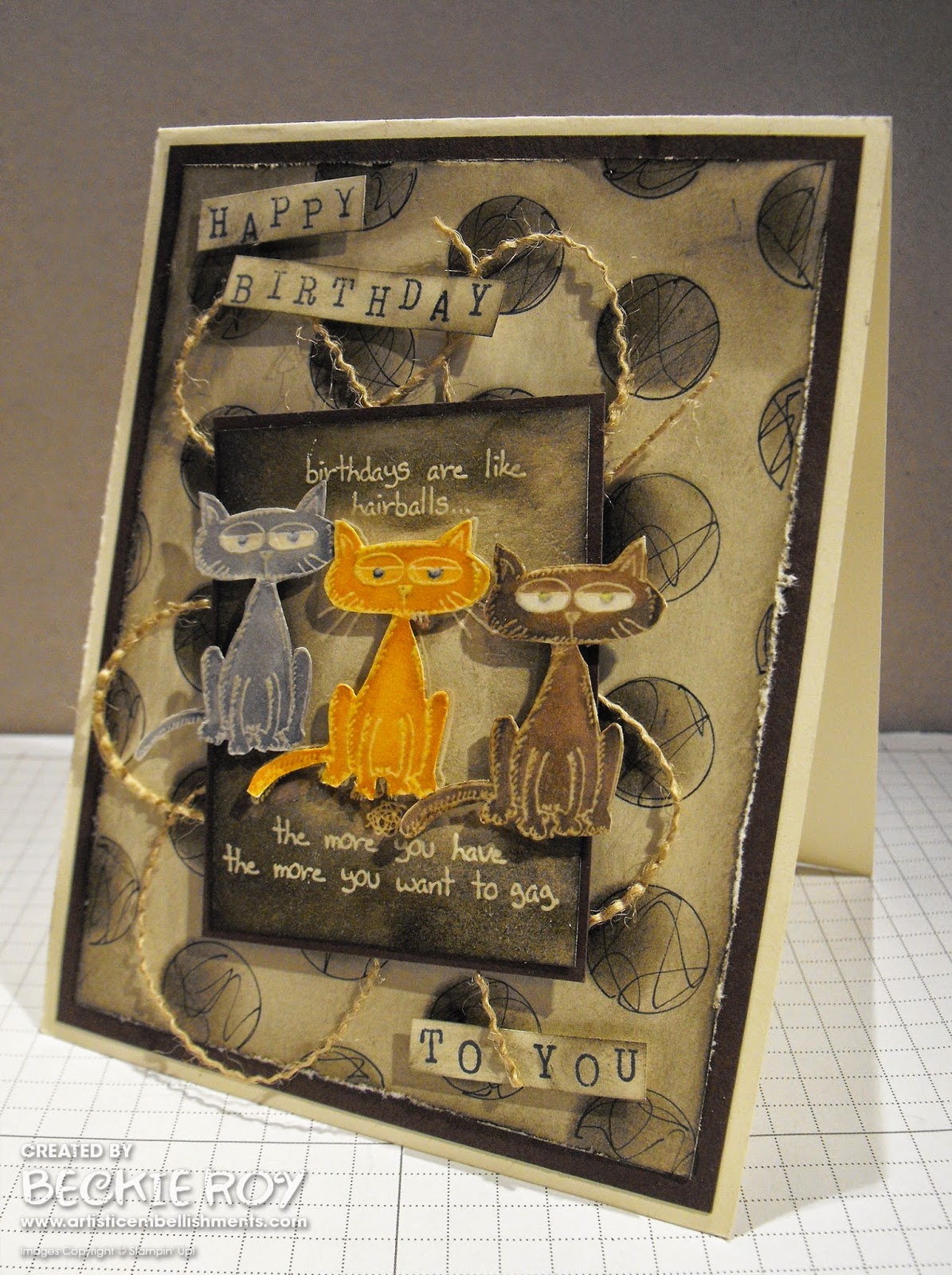 I stamped and trimmed around the kitties, then coloured them in with Smoky Slate, Pumpkin Pie and Crumb Cake Blendabilities Markers. But it still needed something. So I added a Happy Birthday To You sentiment made with the Alphabet Rotary stamp. It's perfect for making your own custom greetings. I like to cut them out so they look like labels.
﻿ 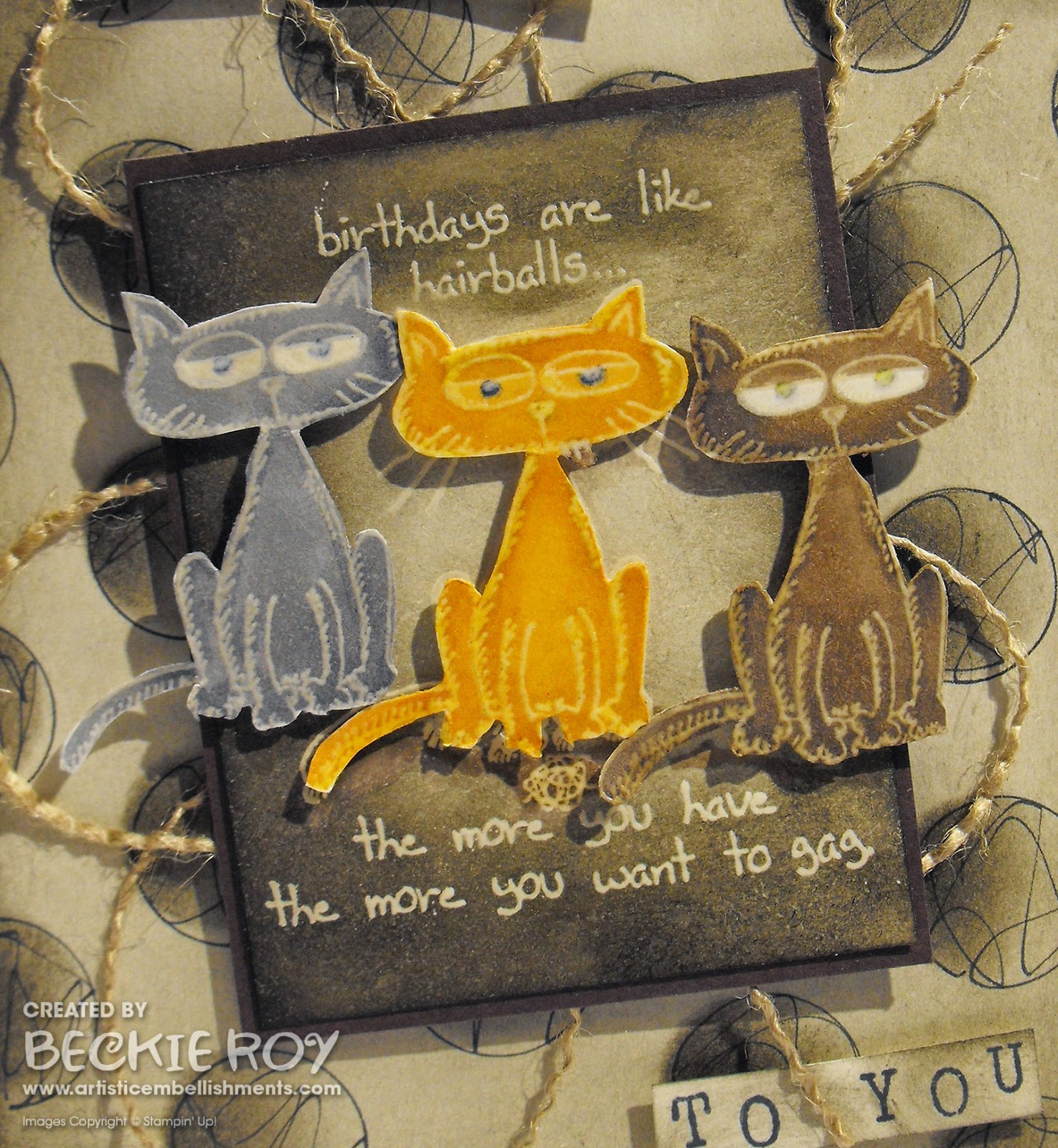 ﻿
As a final touch, I had some strands of Burlap Ribbon (as I rarely throw my scraps away, since you never know when you may need one!?). I made them in a circular pattern around the kitties before adhering the layer to the card front. 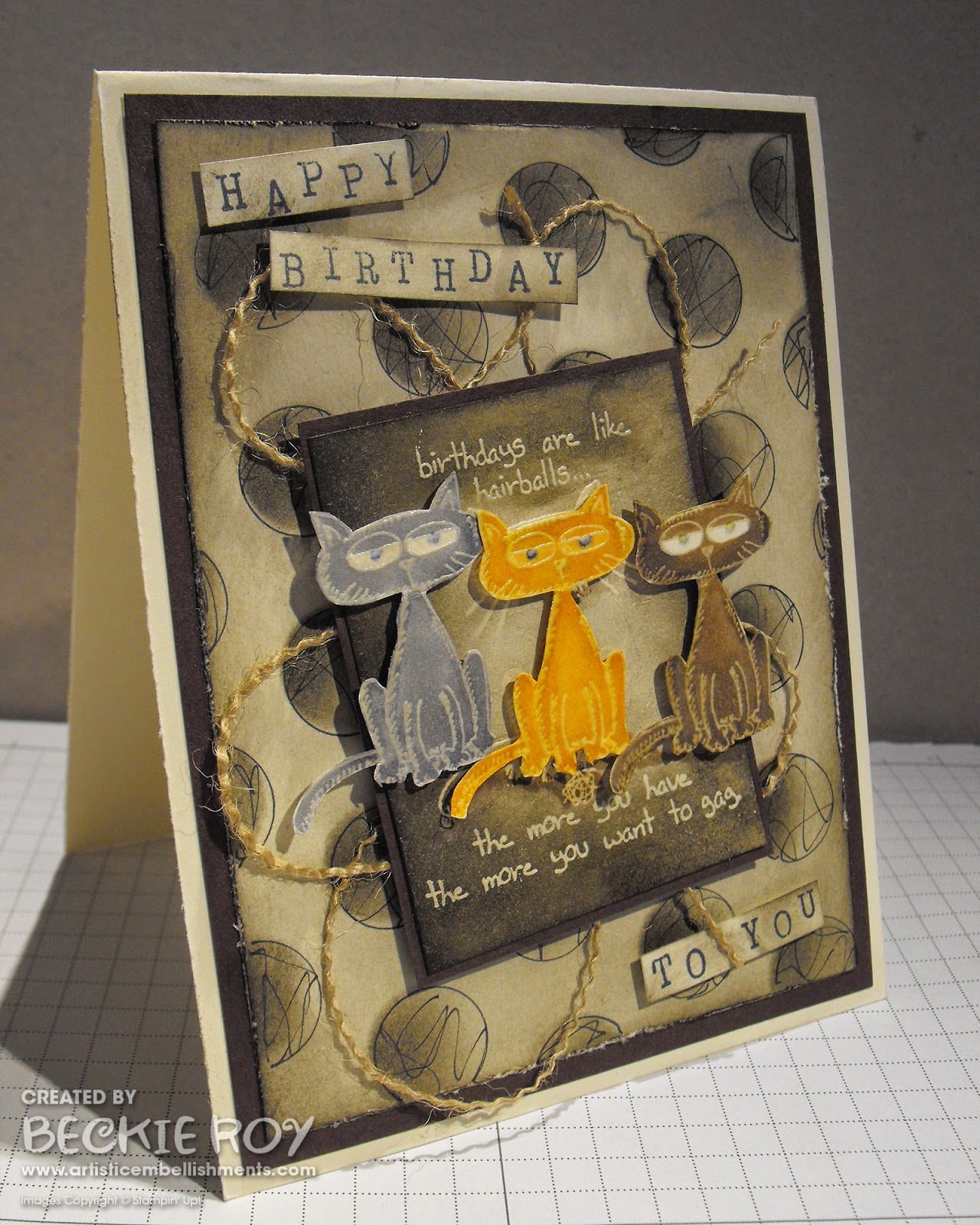 Next up is the bowl of cherries... For this one, still keeping with the theme - opted to use the Hardwood background stamp. I must say this is one of my all-time favourite and most used stamps - LOVE IT!! I then stamped the bowl of cherries twice, cuting out the top image around the bowl - not the stems... too fussy.
﻿ 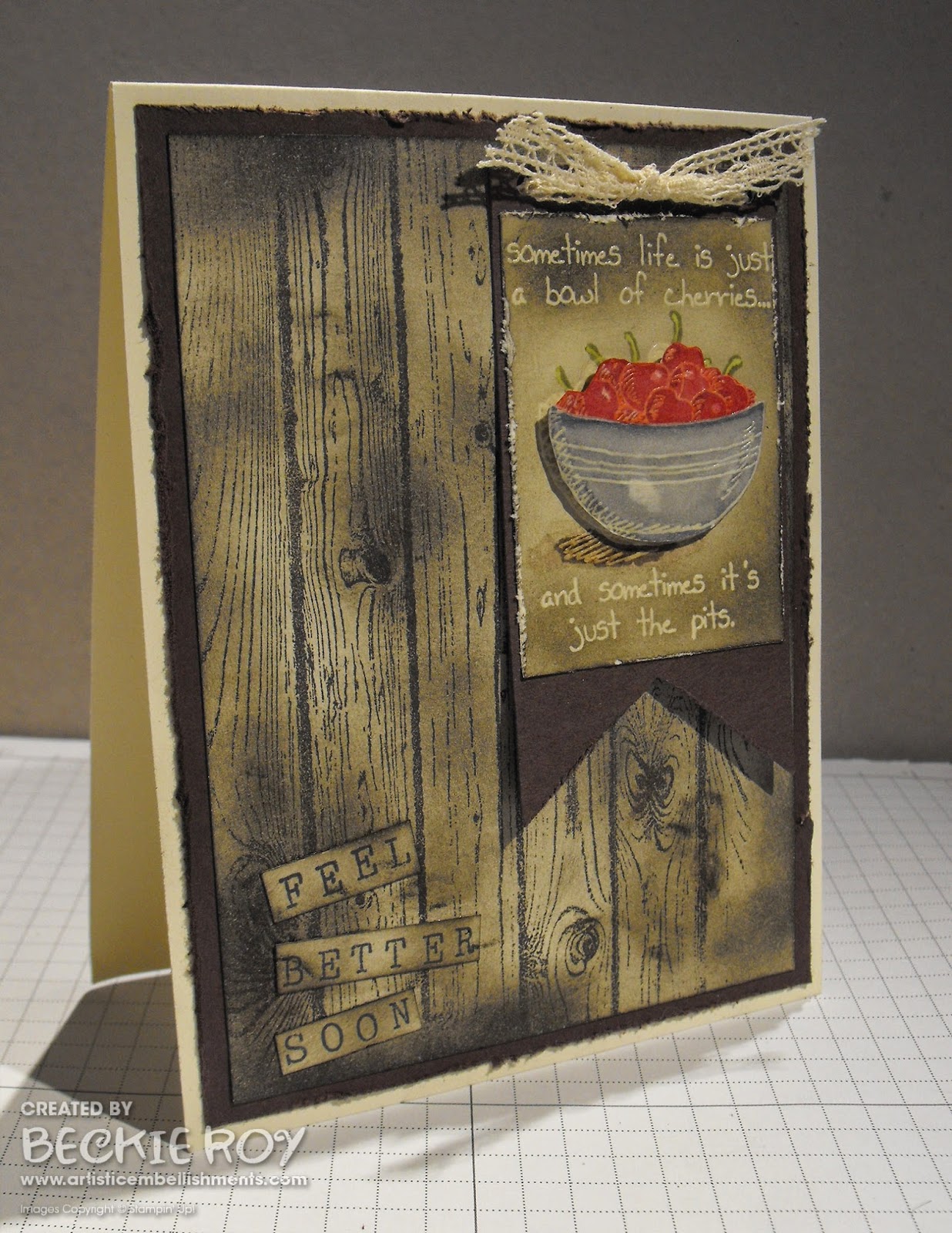 I used the Banners Framelits Dies to mat my cherries onto and tied a piece of Vintage Crochet Trim to the top. The cherry bowl is also coloured with blendabilities - Smoky Slate and Cherry Cobbler. I did add a bit of Old Olive to the stems. I again used the Alphabet Rotary stamp to make the Feel Better Soon sentiment at the bottom of my card. Love this fun sentiment - "Sometimes life is just a bowl of cherries.. and sometimes it's just the pits."  My last one has the cute doggy chasing his tail...
﻿ 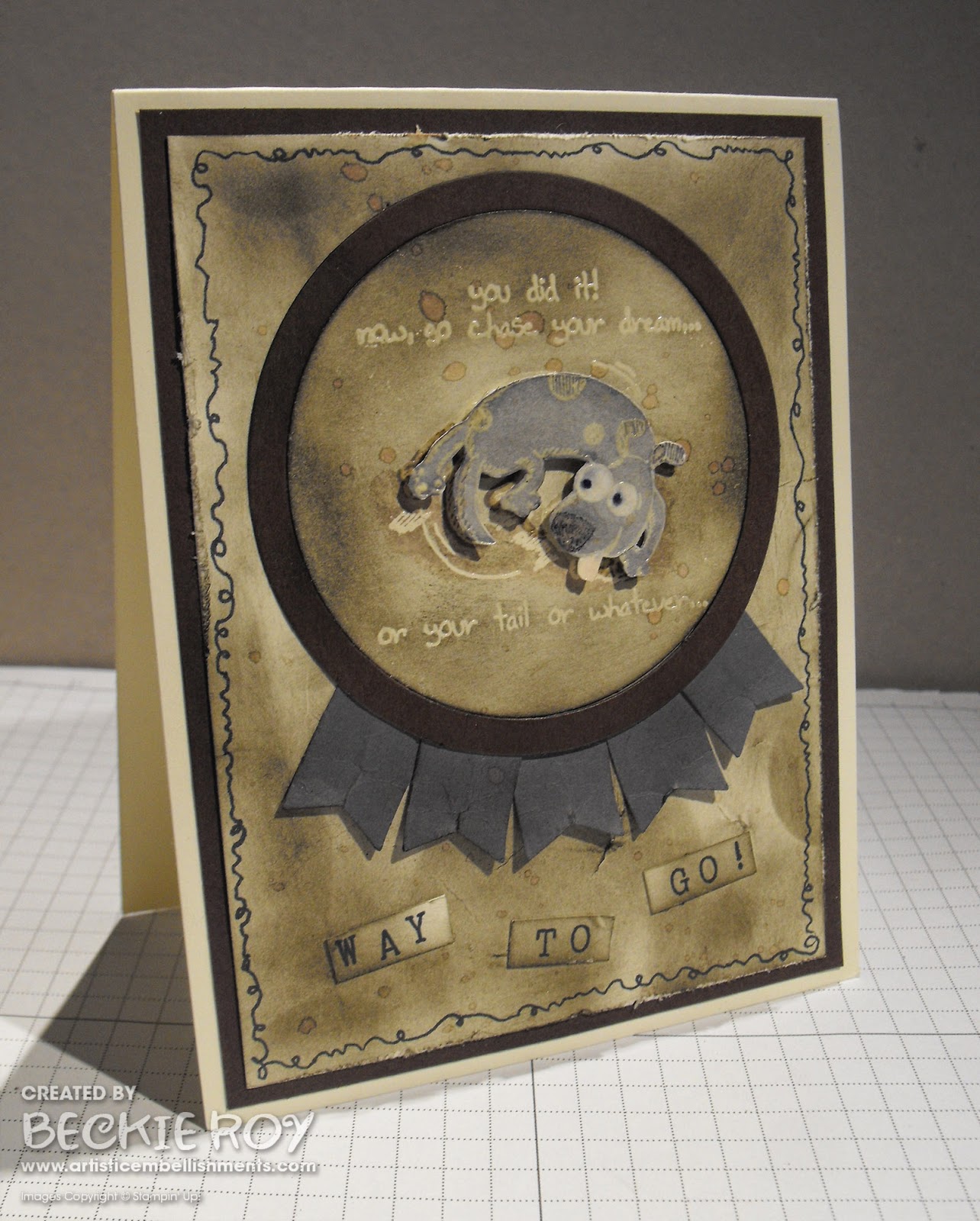 For this one I tried some doodling around the edge of my Very Vanilla layer... I love the look of doodling and there is no right or wrong - just where the pen takes you! I made my layers look like a ribbon (well, sort of!), adding a bit of Basic Gray for the banners - since I coloured the doggy gray too. I used the same splatter technique as the cheese card. 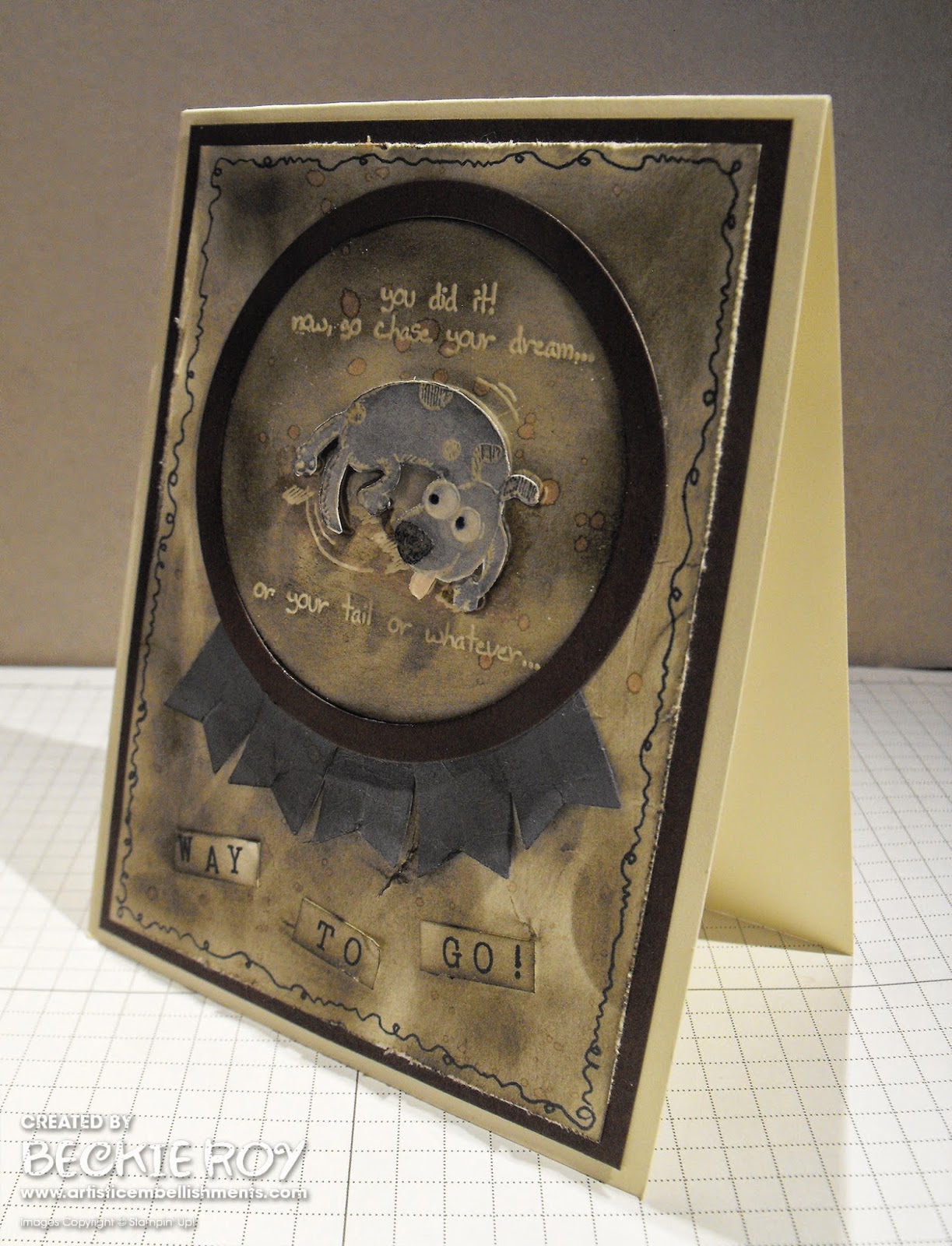 I had so much fun playing with this set and giving them all a vintage/grunged out look. The coloured images really pop off the card with the neutral card bases!
I have another set that I haven't played with in a while, that I made a card with each of the different sentiments to share later in the week with you. I hope you'll come back to check them out. Have a great day!
Stampin' Up! Supplies Used:

Thanks for stopping by, happy stamping!
Beckie
Posted by Unknown at 12:13 PM